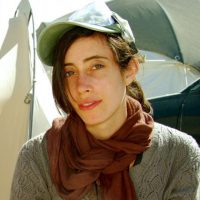 Kitra Cahana is an American-born photographer who grew up in both Montreal, Canada and Gothenburg, Sweden. She began her career at 17, when one of her photographs of the Israeli disengagement from Gaza landed on the front page of The New York Times. In 2007, she worked at The New York Times as a photographic intern. Cahana then received a scholarship to work at Benetton’s research communication center in Treviso, Italy. There, she contributed to stories for COLORS magazine, covering issues in the Pacific islands of Vanuatu and Niue, and in the Democratic Republic of the Congo and Kenya.

Cahana’s Rainbowland, shot for COLORS #76: Teenagers, won “First Prize – Stories” in the World Press Photo’s Art and Entertainment section. She was also a Finalist for POYi’s Community Awareness Award for her work on the Rainbow Family, a non-hierarchical group that holds free gatherings around the world. In July 2009, they brought 25,000 people together for a week in the wilderness in New Mexico. Cahana was there photographing for COLORS.