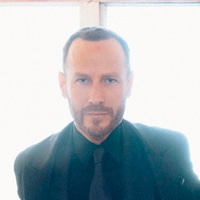 Jason Bentley is Music Director of influential NPR radio station KCRW in Santa Monica, and host of their acclaimed programs Morning Becomes Eclectic and Metropolis. Bentley has established a distinguished career as a music supervisor for film, including The Matrix Trilogy and TRON Legacy with Daft Punk. He maintains a busy DJ schedule including recent sets at The Coachella Festival, The Electric Daisy Carnival, Lightning In A Bottle, as well as various art, fashion and music industry events. Bentley has worked at Madonna’s Maverick Records as well as Island Records with founder Chris Blackwell. He also works closely with the Recording Academy (NARAS), the organization behind The Grammy Awards.

I have always been fascinated by the power of music, from translating the most intimate moment to commanding the masses, it's a profound connection between us all. It's with respect for that connection that I approach my work every day.