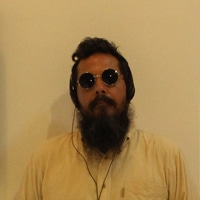 Henry Eric Hernández is a Cuban-born transdisciplinary artist, social researcher and professor. He is a Graduate in Fine Arts from the Higher Art Institute of Havana and earned a PhD in media studies from the Complutense University of Madrid.

Hernández has received fellowships from the John Simon Guggenheim Memorial Foundation, the Pollock-Krasner Foundation, the Christoph Merian Stiftung, the Shigaraki Ceramic Cultural Park and the Botín Foundation. Perceval Press has published two of his works, including Revenge and Another Island for Miguel. In 2016, Almenara Press-Leiden released his most recent book, Martyr, Leader and Pachenga.

Maryse Goudreau is an artist, independent scholar and filmmaker working across photography, archives, video and participatory art. She offers a sociological, political and anthropological point of view that encourages viewers to think about the importance of social history. Using a hybrid approach, she attempts to release images from their static relationship to an official history and create narrative, literary, pictorial and other types of spaces.

Maryse Goudreau lives in Escuminac on the Gaspé Peninsula, in Québec, Canada. Disseminated in different parts of the world (North America, Mexico, Cuba & Europe), her work is also included in national collections such as: the Montreal Museum of Fine Arts and the Musée National des Beaux-Arts du Québec.