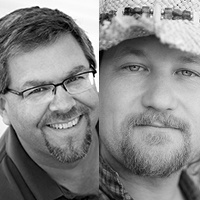 Greg Downing specializes in image-based 3D technologies and computational photography techniques. His photographic work has been displayed in several museums including the American Museum of Natural History, the Cincinnati Art Museum and the Denver Museum of Nature and Science. He has worked in film production as a technical director at Rhythm & Hues as well as Sony Pictures Imageworks on The Chronicles of Narnia, Spiderman 3 and I Am Legend.

Eric Hanson is a visual effects designer specializing in the creation of digital environments. Having worked with leading visual effects houses such as Digital Domain, Sony Imageworks, Dream Quest Images and Walt Disney Feature Animation, his work can be seen in The Day After Tomorrow, Cast Away, Mission to Mars, Fantasia 2000, and The Fifth Element, among others.