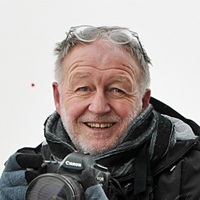 Award-winning National Geographic photographer Gerd Ludwig has captured the colossal changes since the dissolution of the Soviet Union to today. His images have garnered him distinction as the world’s foremost color photographer documenting the region. From the broken empire’s legacy of environmental exploitation, to the warp-speed economic transformation of Russia, Ludwig’s work reveals a many-faceted people, by turns suspicious and sympathetic, greedy and generous, stoic and exuberant.

After first photographing the aftermath of the Chernobyl nuclear disaster for National Geographic in 1993, Ludwig returned several times. Recently, he ventured deeper into the failed reactor than ever before and returned with haunting images, which will be a part of his upcoming monograph, The Long Shadow of Chernobyl.

A great photograph touches the soul and broadens the mind.