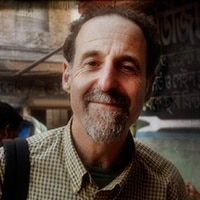 Photographer Geoffrey Hiller has been documenting the people of Burma since 1987 and has returned several times since 2011 to capture evidence of change, including images of rallies for Aung San Suu Kyi. Hiller’s work has been published in magazines in the US, Europe and Japan including Newsweek, Mother Jones and The New York Times Magazine. His multimedia projects about Vietnam, Eastern Europe, Ghana, Burma and Brazil have earned recognition from NPR, The Christian Science Monitor and USA Today.