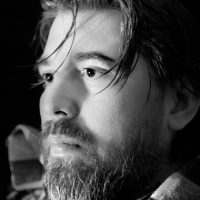 Geandy Pavón is a Cuban-American painter and photographer interested in the “conceptual aura” of ruins and decay in everyday practices of power display, issues he has developed with his Empire and Wrinkle Portraits series. In his work, Pavón also engages with issues such as iconoclasm, totalitarianism, and ideology. Nemesis (2010-2012), one of his best-known works, consisted of projecting photographs of renowned dissidents and political prisoners onto the facades of embassies and consulates. Most recently, Pavón visited Costa Rica to document the mass migration of Cubans to the Central American country.

Pavón graduated from the National School of Fine Arts (ENA) in Havana, Cuba and studied at the School of Fine Arts El Cucalambé, in Las Tunas, Cuba. Pavón has lived and worked in New York City since 1996. His work can be found in private and public collections in Mexico, Cuba and the United States.