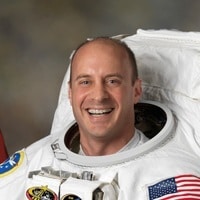 Reisman was featured on multiple episodes of The Colbert Report. In 2011, he left NASA to become the DragonRider Program Manager at SpaceX in Hawthorne, California. In his new job, he works with NASA to prepare SpaceX’s Falcon 9 rocket and Dragon spacecraft to carry astronauts, and is responsible for contracts with NASA totaling over $500 Million.