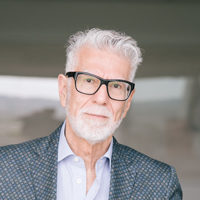 Firooz Zahedi’s family moved from his birthplace in Tehran, Iran to England where he received his secondary education. In 1969, he came to the United States to attend the School of Foreign Service at Georgetown University. After a brief career as a diplomat in Washington, D.C., he went on to attend the Corcoran School of Art and graduated with a degree in Visual Communication in 1976. Zahedi had already begun working as a photographer for Andy Warhol’s Interview magazine while attending art school. In 1978, his friendship with Elizabeth Taylor led to her choosing him as her personal photographer on a film set in Hollywood.

Zahedi then made Los Angeles his home and built his career as a portrait photographer, working for major magazines, including Vanity Fair, Time, Vogue, and GQ. His advertising work includes the iconic image for the movie poster for Quentin Tarantino’s Pulp Fiction. At the same time he was doing commercial work, Zahedi built up his portfolio of fine art photography and collages, exhibiting his work at galleries in Los Angeles and New York. His photographs have also been shown at LACMA and the Norton Museum of Art in Palm Beach. He lives in Los Angeles and New York.