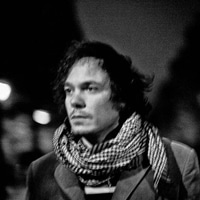 Fabio Bucciarelli is a documentary photographer who focuses his attention on conflicts and humanitarian consequences of war. He spent the last few years working inside the major worldchanging events in Libya, Syria, South Sudan or Mali.

Fabio collaborates with international magazines, newspapers and agencies including Time, The New York Times, Agence France-Presse and UNHCR. He received the greatest awards in photojournalism including the Robert Capa Gold Medal, World Press Photo, Prix Bayeux-Calvados, and three times the Picture of the Year. Fabio’s work has been exhibited in galleries and museum worldwide. He is the co-founder of MeMo, a platform that uses the strength of digital technology to develop new ways of storytelling. The Dream book, Fabio’s long term project on the world refugee crisis, will be published in 2016 by FotoEvidence