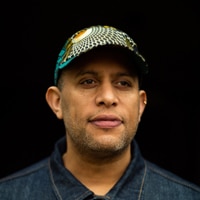 Los Angeles-born artist Eric Coleman began taking pictures at the age of 12. His youthful hobby led to a career as a professional photographer in which, over a decade, Coleman has grown to become an innovator with a unique style. Coleman deepened his appreciation and enthusiasm for photography while attending the Royal College of Art in London. While there, he was able to cultivate his distinctive style of visual communication further, while honing his craft with top-level professionals.

Coleman first gained editorial commissions while working as a freelance photo assistant for some of the most-acclaimed photographers of our time, such as Peter Lindbergh, Melodie McDaniel, Steve Hiett, Robert Erdmann, and Rankin. Coleman has honed his skills in a diverse range of fields such as fine art, photo journalism, fashion, landscape, and music photography that have taken him all over the world.

Coleman partnered with L.A.-based photographer Brian “B+” Cross to form Mochilla, a production company that has produced several films, music videos, and albums. As an executive producer and cinematographer, Coleman spent the last three years working on Brasilintime: Batucada com Discosa film that explores the relationship between hip-hop and Brazilian music.

Coleman has exhibited his photographic work at the Transport Gallery in Los Angeles, Commonwealth Gallery in Virginia, and the Royal Academy of Art in London. His photographs have graced the pages of numerous publications including InStyle, ReUp, The Fader, Teen Vogue, and many others. He also shoots for record labels, such as Stones Throw, Warner Brothers Music, JazzySport Japan, Sound in Color, and Sony Music.

Utilizing signature techniques, including his stylized approach to black-and-white, iconic portraiture, and distinctive eye for detail, Coleman creates powerful and striking imagery for music, advertising, fashion, editorial commissions and personal photojournalism. The diversity of his interests has given Coleman an artistic perspective of uncommon breadth, which is evident in the spectrum of his photographic work.