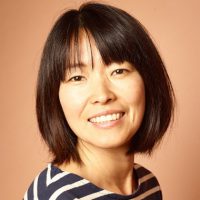 Eri Morita was born in Kumamoto, Japan and grew up in Tokyo.  After graduating Ferris University in Yokohama, she moved to New York City to study photography at the International Center of Photography. She went on to work as an editorial photographer for magazines including W, Vogue Nippon, Newsweek, Seventeen, Jane, Cosmo, YM and Der Spiegel. Her fine art project “Home Drama,” which started in 1999, has been widely exhibited and granted awards in the US, France, Mexico, Russia and Japan. She has received awards including the 7th Canon Cosmos of Photography Award in 1998, the Itaru Hirama Award in 2005, PDN’s 30 in 2005, the 2014 Japan Photo Award and the 6th Annual JGS Artist Award in 2015. Morita’s work has been collected by Joy of Giving Inc., Kiyosato Photo Art Museum and the Milwaukee Museum of Art, among others.