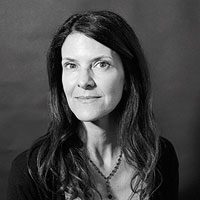 In 2013 and 2014, Elena Dorfman was asked by the United Nations High Commissioner for Refugees to photograph Syrians throughout the Middle East who had fled war and persecution at home. Making portraits and audio recordings throughout Lebanon, Turkey, Kurdistan, Jordan, and Egypt, Dorfman, primarily a fine art photographer whose work has exposed marginalized communities in a way that brings them respect and attention, found herself most compelled by the teenage refugees.

Dorfman’s Syria’s Lost Generation project portrays a physics champion, a published poet, a religious scholar and a girl who simply misses the particular taste of her favorite food from home. Each speaks of powerful longing and frustration. Forced to flee their homes and with little opportunity for study or meaningful work, they all spoke about their lives passing them by and futures lost. They are, indeed, the lost generation of Syrians, sitting out young adulthood in exile.