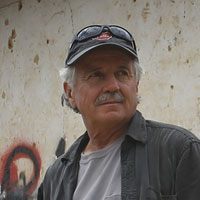 Don Bartletti‘s 6-part photo essay “Enrique’s Journey” was awarded a Pulitzer for Feature Photography. He was one of the first photojournalists to document the ongoing Central American diaspora of children clinging to freight trains and their dreams of crossing into the U.S. Success came only to the brave and the lucky.

After 32 years with The Los Angeles Times, Bartletti retired in late 2015. He is a frequent guest lecturer and teacher at universities, high schools and civic organizations in the U.S. and Mexico. His photographs have been exhibited in museums internationally and are published in books and scholarly studies. The long-time San Diego County resident is compiling a photographic book about causes and consequences of illegal immigration.