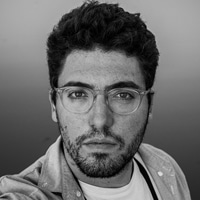 Dominic Nahr was raised in Hong Kong and graduated with a BFA from Ryerson University’s photography program in Toronto. In 2009 Dominic was the the first recipient of the Oskar Barnack Newcomer Award. Dominic was selected to take part in the Joop Swart Masterclass sponsored by World Press Photo and the Magnum Emergency Fund. He was recognised for his work in Sudan by World Press Photo in 2013, and in Egypt, Somalia and Sudan by Pictures of the Year Awards in 2012 and 2013. In January 2015 Dominic was named Photographer of the Year at Photo15 in Zurich. His editorial clients include TIME, The New Yorker, Wired, Outside, Stern, Schweizer Illustrierte, NZZ, amongst others.