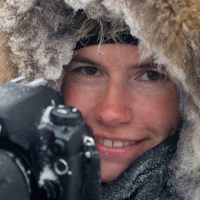 Daisy Gilardini fell in love with Antarctica on her first trip in 1997, and has since spent most of her time photographing Polar Regions. Gilardini’s photographs have been published internationally by leading magazines and organizations, and she has received awards from many of the most prestigious photo contests in the world. Her passion for the natural world has grown into a lifelong commitment to inspire others to respect and preserve our fragile planet. This dedication to the environment led to her 2009 nomination to the Emerging League of the International League of Conservation Photographers.