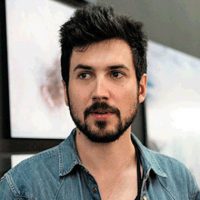 “I was always inspired by photographers who have worked on long-term projects for years,” says Ciril Jazbec, who has documented communities affected by climate change and other issues. “It’s not about the length of one trip,” he says. “I try to get very close to communities.” He first gets to know people, not taking photos. After funding a trip to Greenland with an environmental grant, he made two more trips with support from National Geographic. His photos became more intimate upon his return. “I brought a backpack of prints to give as gifts. People started to invite me to family parties and on trips.”

Jazbec took photo workshops while studying economics, then enrolled in photo school. For his senior project, he photographed residents in Kiribati, the South Pacific nation disappearing as oceans rise. He entered the series in competitions, and caught the eye of Ruth Eichhorn, director of photography (now editor at large) at German Geo. She sent Jazbec for a month to an island in northwest Alaska where villagers can no longer support themselves by hunting or fishing. The story helped Jazbec win the Leica Oskar Barnack Newcomer Award, one of several honors that “opened a lot of doors,” and introduced him to National Geographic editors.

He funds projects through grants and advertising assignments. Last year, when waves of asylum seekers began passing through a Slovenian village an hour and a half from his home, he wanted a different way to cover the refugee crisis. He focused on the bewildered response of the villagers themselves, after spending time earning their trust. National Geographic published the images online.

“I believe to make good work, you have to enjoy it 100 percent,” he says. “In the last few years it’s been like I’m living a dream.”