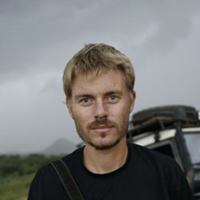 Christoph Bangert is a German freelance photojournalist covering international political events and conflicts. He has extensively covered the wars in Iraq and Afghanistan for The New York Times and other publications.

In 2002, Bangert shipped an old green Land Rover from Germany to Buenos Aires and drove from Argentina, 22,000 miles to New York City in six months. The journey resulted in his first book titled Travel Notes. Bangert has worked in Palestine, Japan, Darfur, Afghanistan, Indonesia, Pakistan, the US, Lebanon, Nigeria, Zimbabwe and Iraq, where he spent about nine months in 2005 and 2006 on assignment. His work from Iraq is collected in IRAQ: The Space Between.

Bangert’s pictures have been published in leading international publications and he regularly photographs on assignment for The New York Times, Stern Magazine and Neue Zürcher Zeitung. He has won awards from World Press Photo, POYi and others and participated in the Joop Swart Masterclass.