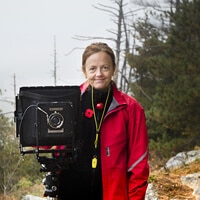 Christine Fitzgerald is an award-winning fine art photographer from Ottawa, Canada. Much of her work deals with the fragile relationship between humans and nature, and the tension that this relationship inevitably creates. Her images are produced intuitively using digital and vintage large format cameras and lenses, often integrating historical and modern photographic tools and processes.

Fitzgerald has degrees from Acadia and Dalhousie Universities, and completed the diploma program at the School of the Photographic Arts: Ottawa. Her work has been showcased in cities around the world, including Ottawa, Toronto, New York, Brooklyn, Fort Collins, Seoul and London. In 2016, Christine won the IPA Fine Art Photographer of the Year from the Lucie Foundation.