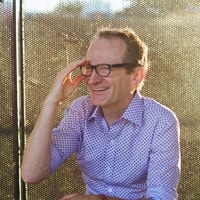 Chris Buck is a highly sought-after editorial and advertising photographer, with clients such as Google, Old Spice, Dodge, GQ and The New Yorker. For three decades Buck has carved out a unique space in the world of celebrity portraiture, capturing its ineffability ­– its danger, its oddness and its warped sense of reality. His groundbreaking work has been collected in a large retrospective monograph: Uneasy: Chris Buck Portraits 1986-2016.

Buck has won multiple awards, including being the first recipient of the Arnold Newman Portrait Prize in 2007. Published in 2012, his first book, Presence: The Invisible Portrait, was a collection of celebrity photos in which the famous sitters are present, but not visible.