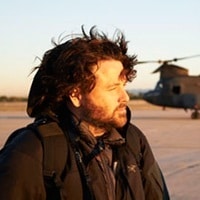 Born in British Columbia, Bryce Duffy’s worldview was influenced at an early age by his childhood experiences exploring the west with his parents and older brother.  Initially inspired by photojournalism he began exploring photography’s power to tell stories and soon after high school began his career as a photographer.  Over the years Duffy’s work has focused on a number of different areas but what has remained constant is a sincere desire to understand and document the human experience, and exploring our relationship with the world we inhabit.

Duffy’s work has appeared in publications as far ranging as Arena Homme+ to Wired and he has been commissioned to shoot global advertising campaign for clients including Apple, Nike, SAP, Toyota and Verizon.  He’s won multiple awards for his photography from American Photography, The Art Directors Club and Communication Arts and his fine art work is held in private and corporate collections in the US and Canada.