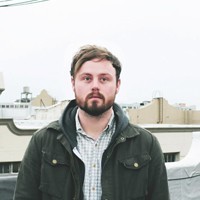 Bryan Schutmaat is an American photographer whose work has been widely exhibited and published in the United States and overseas. He has won numerous awards, including the 2013 Aperture Portfolio Prize, Center’s 2013 Galllerist’s Choice Awards, the 2013 Daylight Photo Awards, and the 2011 Carl Crow Memorial Fellowship, among many others. In 2014 Bryan was selected for PDN’s 30 new photographers to watch; in 2013, Dazed Magazine named Bryan one of Paris Photo’s “breakout stars,” and he was chosen as a Flash Forward Emerging Photographer by the Magenta Foundation. His first monograph, Grays the Mountain Sends, was published by the Silas Finch Foundation in 2013 to international critical acclaim. He holds a BA in history from the University of Houston and an MFA in photography from Hartford Art School. His photos can be found in the permanent collection at the Baltimore Museum of Art, the Museum of Fine Arts, Houston and numerous private collections.