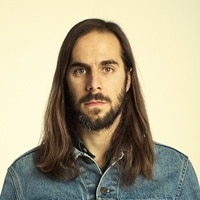 Bryan Derballa is a photographer based in Brooklyn. He was led to photography by skateboarding and traveling, and has run the Lovebryan photo blog since 2006. His editorial clients include The Wall Street Journal, T: New York Times Style Magazine and Wired, and his commercial clients include J. Crew, Palladium Boots and K-Swiss. Derballa was chosen as one of PDN’s 30 emerging photographers of 2014.