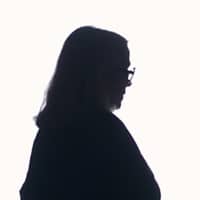 She left school to be an apprentice at the black & white lab of Elle’s in Paris. In 1975, at the Cannes Film Festival, while on assignment for French Elle, she met Dustin Hoffman and Donald Sutherland where each of them respectively invited her to the film sets of Fellini’s Casanova and All the President’s Men. Soon after, she met Steven Spielberg who invited her to work on the set of his film, Close Encounters of the Third Kind. In 1985, Lacombe became the first and only staff photographer at the Lincoln Center Theater where she remained for 7 years.