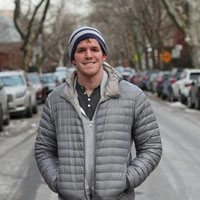 Brandon Stanton first began Humans of New York in the summer of 2010. His goal was to create a catalogue of New York City’s diverse inhabitant through a series of 10,000 portraits. As his work progressed, Humans Of New York became as much about telling stories as it was about visually documenting his neighbors. His books, Humans of New York, Little Humans and Humans of New York – Stories are New York Times Bestsellers, and his work has drawn the attention of over 15 million followers on social media.

In 2015, Stanton traveled to Greece, Hungary, Croatia and Austria to document the stories of refugee families traveling across Europe, as well as those of 12 refugees in Jordan and Turkey who were preparing to relocate to the United States. This series of stories attracted the attention of President Barack Obama who subsequently invited the photographer to his most recent State of the Union address. Actor Edward Norton raised more than $300,000 for one of the refugees featured in the series, a subject known as “The Scientist.”