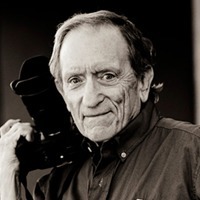 In 1967, a fortuitous meeting with Jann Wenner, the founder of Rolling Stone, resulted in Baron Wolman becoming that publication’s first chief photographer. For three years, his photographs were published regularly in Rolling Stone and became the magazine’s graphic centerpiece. Over forty years later, those same photographs, picture memories of the 1960s, are now widely exhibited and collected.

In 1970, Wolman left Rolling Stone to start his own magazine, Rags — the “Rolling Stone of fashion.” The creative and irreverent monthly featured styles of the times and was an acknowledged journalistic success. When he was suddenly bitten by the flying bug in the mid-seventies, Wolman bought a little Cessna, learned to fly and began doing aerial photography.