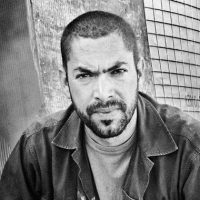 Independent photographer Balazs Gardi works to capture stories about marginalized communities in desperate situations. He spends time with people struck by the harshest conditions as events unfold in overpopulated slums, refugee camps, natural disasters, war zones and other crisis areas, which are often under-represented in the mainstream media.

Gardi spent two years following how the Roma (gypsy) minorities are trying to deal with their growing poverty, declining social status and appalling living conditions in a dozen Eastern European countries. He has traveled regularly to Afghanistan and Pakistan to document life in a region in a state of insecurity and a downward spiral that is dragging these countries back to open warfare.

In recent years, his attention has turned to reporting the local harbingers of the global water crisis. This has evolved into “Facing Water Crisis,” his most ambitious photography project to date. It features an expanding series of individual stories about the most life-threatening environmental crisis mankind has ever faced, covering heavily affected regions around the world. Gardi’s worldwide independent expedition exploring the far-reaching consequences of the global water crisis has recently evolved into Azdarya, an online magazine solely dedicated to water.