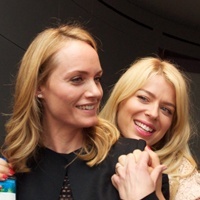 Model and actress Amber Valletta has graced the covers of Vogue, Harper’s Bazaar, Elle, Allure, I-D, Wand Time. Her film and television career includes MTV’sHouse of Style, ABC’s Revenge, What Lies Beneath andHitch. She has served as the face of some of the biggest brands in fashion, as well as an ambassador for numerous social and environmental organizations. Valletta is involved with the Natural Resources Defense Fund, Oceana, the International Foundation for Animal Welfare, Raise the Roof for Haiti, Friendly House and St. Jude Children’s Research Hospital.

Amanda de Cadenet is a fashion and portrait photographer, television producer and host. She is the youngest woman to shoot a Vogue magazine cover and has photographed many influential figures in popular culture. She is best known for her intimate portraits of women, in which she captures their true and unique selves.