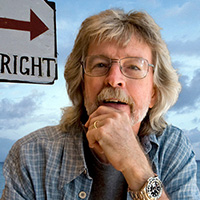 Al Satterwhite started working as a photographer at a major daily newspaper in Florida while in high school, covering major news stories in the Southeast. After a year as the Governor of Florida’s personal photographer, he started a career as a freelance magazine photographer. Over the next 10 years he worked on assignment for almost every major magazine (Automobile, Car & Driver, Fortune, Geo, Life, Look, Money, Newsweek, People, Playboy, Sports Illustrated, Time, Travel & Leisure, to name a few).

In 1980 he moved to New York City to form his own production company and concentrate on advertising. For the next 15 years he did a wide range of national and international advertising work, becoming known for his saturated color images and keen sense of design and composition….. from action and aerial work, to miniatures in the studio, to major production campaigns in worldwide locations. Some of his advertising clients include American Express, Coca Cola, Dole, DuPont, Eastman Kodak, Johnson Outboards, Kent Int’l, Molson, Nikon, Oldsmobile, Porsche, Polaroid, R J Reynolds, Saab, Sony, Tuborg, Universal Studios and Westinghouse.

He was a consultant to Kodak for digital imaging for a number of years. He has lectured at Boston University, Brooks Institute of Photography, Hallmark Institute of Photography, ASMP, NYU/Tisch School of the Arts, PhotoExpos in Los Angeles & New York. He has given workshops at Dawson College (Montreal), ICP (NYC), Kauai Photographic (Hawaii), the Maine Workshops, the Missouri Workshops, Palm Beach Photographic Workshops, Santa Fe Workshops & his own studio in New York City. He lectures and holds workshops at various facilities around the U.S.

In recent years he has focused his attention on making films. He has shot commercials, features & award-winning feature shorts as Director/Cameraman. He is currently working on several book and museum projects. Satterwhite lives in Los Angeles with his wife and two Zen-Masters, both cats.