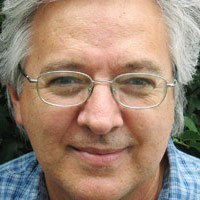 Abelardo Morell was born in Havana, Cuba in 1948 and immigrated to the United States with his parents in 1962. Morell received his undergraduate degree in 1977 from Bowdoin College and an MFA from The Yale University School of Art in 1981. In 1997, he received an honorary degree from Bowdoin College.

He has been the recipient of a number of awards and grants including the Cintas grant, the Guggenheim fellowship, the Rappaport Prize and a grant from the Alturas Foundation grant to photograph the landscape of West Texas. He was the recipient of the International Center of Photography 2011 Infinity award in Art.

Morell’s work has been collected and shown in many galleries, institutions and museums, including the Museum of Modern Art, The Whitney Museum of American Art, the Metropolitan Art Museum in New York, The Chicago Art Institute, The San Francisco Museum of Modern Art, The Houston Museum of Art, The Boston Museum of Fine Art and The Victoria & Albert Museum. A retrospective of his work organized jointly by the Art Institute of Chicago, The J. Paul Getty Museum and The High Museum was on view in the summer of 2013.