The final installment of Annenberg Space for Photography’s summer screening series – at the iconic hip-hop eatery Delicious Pizza – concludes with this special screening of the feature-length documentary, NAS: Time Is Illmatic. Coinciding with the 25thanniversary of the release of his seminal album Illmatic (1994), featured in Rolling Stone’s list of the “Greatest Albums of All Time,” this screening will include sets by Delicious Vinyl DJs, a free slice of pizza, and a Q&A with host Martha Diaz, the film’s associate producer. 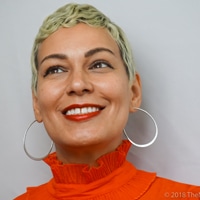 Martha Diaz is a community organizer, educator, media producer, archivist, curator, mentor, and serial social entrepreneur who for twenty-five years has traversed between the hip-hop entertainment industry, public arts sector and academia. Her passion is advancing social justice and transforming communities through media, technology, and leadership development. She has produced and consulted on several hip-hop documentaries including, Where My Ladies At? (2007), Black August: A Hip-Hop Concert (2010), and Nas: Time Is Illmatic (2014). As an educator, she has taught middle and high school students in Harlem and the Bronx and was an Adjunct Professor at New York University’s Gallatin School. In 2010, Diaz launched the Hip-Hop Education Center to cultivate and formalize the field of hip-hop-based education.

A graduate of the New York University Moving Image Archiving and Preservation Program, Diaz has worked with Parkwood Entertainment (Beyoncé Knowles-Carter), the Tupac Shakur Estate, and USC-KAOS Network. She has served as a Fellow at the Lemelson Center for the Study of Invention and Innovation at the National Museum of American History, Visiting Scholar at The Schomburg Center for Research in Black Culture, Community Scholar at Columbia University, and the Nasir Jones Fellow at Harvard University. Diaz is currently the New School Creation Fellow at the High Tech High Graduate School of Education where she is co-designing the first online Hip-Hop high school.

Delicious Pizza is a hip-hop pizza shop founded in 2015 by father-son duo Fred and Travis Sutherland and Delicious Vinyl founder Mike Ross and brother Rick Ross. Located in L.A.’s West Adams neighborhood and on the iconic Sunset blvd. in Hollywood, the restaurant’s high-quality pies and golden-era hip-hop memorabilia has made it a destination for local residents and music fans alike. Tourists in Hollywood from all over the world flock to Delicious for that unique experience of music and food. Memorabilia from the golden era of hip-hop lines the walls and the speakers are always blasting something cool from the old school.

The West Adams Block Party, one of the many community events hosted by The Ross Brother’s & Delicious Pizza;  has featured artists Talib Kweli, KRS-One, Doug E. Fresh, Masta Ace, Mellow Man Ace & many others,  will take place this year on Sunday Sept 1, 2019.